21st of April was The First Day of Summer – Sumardagurinn Fyrsti in Iceland.  It is a public holiday with festivities all around the island.  Iceland has sixteen public holidays.  The next one is Fishermen’s Day – Sjómannadagurinn, on the 5th of June. It is celebrated every year and always on the first Sunday of June.  The Icelandic Association of Chicago has not been celebrating these holidays but that is something to think about!  Our next festival is Iceland’s Independence Day, 17th of June, which we will celebrate on the 11th at Jóhann Friðriksson‘s house in LaGrange Highlands.  Jóhann is one of IAC‘s newest members and graceously offered up his house for our picnic.  My in-laws imported the Icelandic Hot Dogs so we are all set. More info in the newsletter but I hope you can make it.

2016 started out with a bang for IAC.  We had a sold out Þorrablót the 19th of March at the Swedish American Museum, 130 attendees with our Ambassador Geir Haarde and his wife Inga Jóna Þórðardóttir as guests of honor. This was the second year we invited a chef from Iceland and this time he happened to be my brother in-law, Ari Hallgrímsson, who brought his wife Rut, and son Hallgrímur. They did a fantastic job.  So did our musician, Hemmi, who rocked the house  once again and led the Valkyrju and Viking choirs in a sing off.  Everyone was happy, and what a great time.  We have pictures on our webpage.

I also would like to share with you that I have been working with lawyers at Mayer Brown on a Nonprofit Status for IAC.  This is a pro bono work on their behalf thanks to our Secretary Haukur Guðmundsson who set this up even though he can not be directly involved as it would be a conflict of interest.  What this means for IAC is that any payments or donations can be considered charitable.  It will take about six months to finalize our status but it will be retroactive 22 months so any monetary contribution you make to IAC this year could be tax deductible.  This is very exciting and I am sure it will help our organization to prosper for years to come and be a boost for the Scholarship Fund.

Enjoy the summer of 2016 and I hope to see you at many of our events.

This May Newsletter features articles on the amazing Thorrablot (even though I didn't win the trip to Iceland) and the INL meeting in Vancouver written by John Hofteig. It also contains information on upcoming events such as the 17da juni celebration, the Greater Icelandic Open and Midsommar Nott in Vasa Park.  I also included some information on the Viking ship sailing from Norway to Chicago. The ship will be on exhibit at Navy Pier for anyone interested in seeing this beautiful vessel.

The newsletter has once again received a facelift, this time to make it look more like the website. We hope you like the new look. The newsletter should be easy to view with different browsers, cell phone operating systems and iPads. If the newsletter does not open or read well on your device please let me know what type of device or browser you use.

Enjoy your summer. I am sure I will see many of you at O'Hare either departing for Iceland on a direct flight or picking up visitors from Iceland!

We’re excited to welcome all IAC members in good standing and their guests to a ‘17di júní’ pylsupartý on Saturday June 11th at 2 PM.  This year we’ll enjoy the hospitality of Jóhann (Joe) Friðrikson and his family who genorously offered their house and garden for our annual hot dog picnic.   IAC treats everyone to Icelandic hot dogs (pylsa), Icelandic style, or as we say it ‘eina með öllu’, which for an Icelander means ketchup, SS Pylsusinnep (mustard), raw and dried fried onion, and remoulade! What makes Icelandic hot dogs unique and oh so good, is that they’re made from lamb meat. Please note that other than the hot dogs, the event is a BYO, so please bring drinks, sides, salads, sweets, or other plates you'd like to eat or share.  We’ll give you the exact address when you sign up but so you have an idea, Joe and Luann live in La Grange Highlands, conveniently close to I-55.  They have plenty of parking, a huge garden, cabana, a hot tub and a swimming pool so please feel free to bring your swimsuit and towel.  For the younger generation and the kid in all of us, they have plenty of activities and games.

We look forward to see you on the 11th.

If you’ve yet to renew your membership or are a new member, please do through our webpage http://www.icelandchicago.org/misc/membership/membershipForm.php

The Icelandic Association of Chicago held its annual Þorrablót March 19th at the Swedish American Museum in Andersonville.  Traditionally we celebrate Þorri in February but this year we wanted to take advantage of the direct flight and booked the musician and chef on the first Icelandair plane to land in our city in 30 years.  People and Thorrafood arrived safely and we were all excited and ready for an extra special celebration and to welcome our Ambassador to the United States, Geir H. Haarde, and his wife, Inga Jóna Þórðardóttir, to enjoy the night with us.  We had a record attendance and sold out weeks before the event.  Everyone had fantastic time savouring Icelandic goodies, cherishing old friends and  making new ones in the spirit of Þorrablót’s motto ‚maður er manns gaman´ (men enjoy the company of other men) as says in Hávamál.  We pride ourselves to throw an authentic Icelandic Þorrablót where all generations come togeter and where sheared sheep heads, pickled rams’ testicle, blood and liver pudding, and many other treasured delicacies take center place on the dinner table.  Our Icelandic chef this year, Ari Hallgrímsson, educated adventurous first comers what they were putting on their plate, and our president, Einar Steinsson, stepped on stage and demonstrated how to eat a sheep head, eye ball and all.  Per tradition, we started the party off with a rotten shark and brennivín, a classic; home made gravlax and a twice smoked leg of lamb from Mývatnssveit.  Other home made food was the rúgbrauð (rye bread), and desserts:  kleinur, ástarpungar, sörur, lakkrístoppar (licorice), meringue cream tarts, skyr and, of course, pönnukökur.    Thanks to Hemmi Ara, our Icelandic musician, we did a lot of singing and no one was exempt when it came to the competition of the men‘s and women‘s choir.  Anna Kárdal decorated the room and this year‘s theme was Svartfuglsegg (Guillemot eggs). 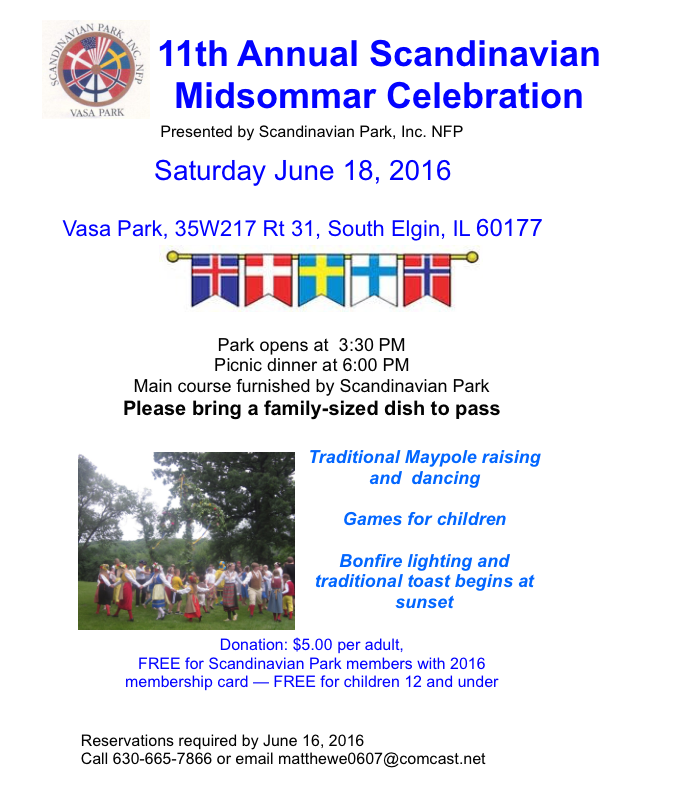 Sunday, June 5th.  BAROKOKO. A program of songs by Swedish poet Carl Michael Bellman and other composers from the 18th and 19th centuries.  2:00 PM - 4:00 PM.
Bring a picnic basket and spend a summer afternoon under the stately oaks of Vasa Park.
Free admission - beverages will be available to purchase - no food vendors at this event - no reservations required. http:/barokoko.se/

Registration for The Icelandic Open starts soon. It will be at the same place as the last few years, Hilldale Golf Club in Hoffman Estate, Sunday August 28th. Spots are limited and we have sold out for the last five years! Trip to Iceland for a ‘hole in one’ and lots of other goodies. If you already know you are going to play, send an email to Lena and Einar at einarandlena@ameritech.net to reserve a spot. Spread the word.

A modern day version of a Viking Ship is sailing from Norway to Chicago. It is named after Harald Hårfagre the first King of Norway. Come see it at Navy Pier between July 27th and 31st!